What a match, for those who follow football & the English Premier League. I don’t follow closely enough to offer hugely insightful commentary, but it was a wild ride.

The keepers and strikers were all in nearly top form, with brilliant defensive plays, and some defenisive lapses. Everton gave up more chances with bad decisions to shoot and not pass, and with telegraphed shots to the nimble and quick Liverpool keeper, Mignolet, back-up to their starting keeper.

Everton also gave up a goal in the fifth minute of play. And nearly a red card in the 35′ as well. It took the ref a long time to decide whether to dole out red or yellow. This could easily have been a red card. Would it have been had it happened to a nicer guy? No issues with his play, Luis Suarez was brilliant today, sliding behind the Everton defense, putting a ball through a poorly constructed wall, and generally making life miserable for Tim Howard, who was not all that pleased with his defense, but has to accept some of the blame himself. Below is a photo of Suarez not diving. He was taken down. 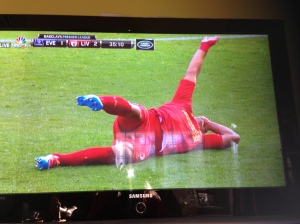 Yes, that is Luis Suarez, by Circespeaks.

To be continued, so I this is not a spoiler for those of you who recorded the early morning match and have not yet watched it.