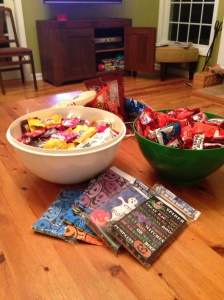 Halloween seemed unimportant to me this year. For the first time, I would have no child of my own at home.
Through the years, we have continued to put a selection of candy–usually three individually packaged “fun size” candies into small, Halloween-themed paper bags. My mother and I did that together when I was small, and it is a fun tradition I have carried on with my own children. Since the candy is in a little bag, the kids aren’t sure what they are getting. Many ask “What is this?” The response to my “Bags of candy!” reply is usually “Oh, cool!”
Maybe it is the sociologist in me, but unlike my husband who hands each child a candy bag, I hold out a tray full of bags to see what happens. Some just grab and go. Others are very thoughtful, choosing among the bags like fortune cookies. The bags are not all the same, but isn’t trading the candy you don’t like part of the fun? And there should be some leftovers for your parents, shouldn’t there?
Of all the kids who came to the door, only four tried for more than one bag of candy. One was a very young toddler, too young to understand the concept of only taking one. Another was a boy of twelve or so, who was sorely tempted. He let his hand hover over the second bag long enough for me to say, “Just one, or we won’t have enough for everyone.”
At the beginning of the evening, after overcoming my resistance to the whole affair, and putting on a long black skirt, black top, black necklace, and heavy black eyeliner–just a Halloween-attired mom, no costume–I was not quite in the flow when the first couple of groups pounded on the door. One boy managed to persuade me to give him a second bag by saying that his friend hadn’t come by. That worked once.
Children do not willingly share candy. As the mom who had to pry too much piñata candy away from her quick and fearless kids, and force them to share with shy malingerers whose parents were glaring at me, I know this. Our home Easter egg hunts were competitive and fun. Public Easter Egg hunts were also painful. My kids were always the ones with too many eggs, and redistribution was always the painful part of the event. I wanted those shy kids to figure it out, to dive in there, and do their best. While I do believe that everyone should have equal access to safe housing, good healthcare, nutritious food, and a good education, all things need not be adjudicated. Everyone will not win the New York City Marathon. I wanted the kids to work it out. My job, as I saw it, was too make sure no one was hit in the head with a baseball bat, and let the Smarties fall where they may!
Last night we enjoyed a Halloween of all nations, sizes, and ages. To some the costume is all-important. I am just as happy to see the middle school or high-school-aged boy in his soccer uniform minus shinguards, as I am to see the creative child or young adult who has made his or her own extremely creative costume, or the little bumble bee, ladybug, or ballerina. Having handed out 150 bags of candy last night–despite some foot-dragging and a late start–I can say that Disney is, happily, “out” these days.
The one quality that all last nights trick-or-treaters shared was that of being polite and saying “thank you.” We were complimented on our decorations. Teenage boys stood patiently aside while toddlers made their way slowly up the steps, and made their equally slow selections. The older kids joked with us, and were friendly. I do not remember being that nice when I was a trick-or-treater myself, nor having much appreciation for the efforts of adults to make the night fun for me.
One girl, in a group of ten or so teenage girls, was unable to resist. As she was turning away, her hand darted out very quickly, and, thinking I wouldn’t notice, she grabbed a second bag. I said nothing. Was I tempting the kids too much by letting them decide how to handle the situation? I don’t know.
What I was reminded of last night is that we are raising very friendly, engaged kids. It was hard to begin again for the first time, without having one or more children of my own plus friends be the first to plunder from our trays of goodies, but I want to remain part of the communal village that makes all kinds of kids feel cared for, not the Grinch that Stole Halloween.
Boy of Silence, in your amazing, possibly homemade, costume: Thanks for explaining it to me. I don’t play video games. You may have more interesting things to say than you give yourself credit for. Next year, I hope you have one friend to Trick or Treat with. Unless, of course, you really do prefer going out alone.