Men at work. The beautiful. amazing, and dare I say, unusual thing about these scenes are that the men are working quietly, and getting exercise and fresh air, not to mention gaining a sense of accomplishment. Who doesn’t love clean gutters?! Um, well, I don’t think about them very often, so I guess love is going overboard. I’m not even sure what terrible things might occur if water and leaves were to coexist in our gutters. Of course I realize that the gutters would become clogged, and water would run down the side of the house, and not neatly through the downspouts. It’s just not the sort of thing this blogger thinks about often. I also did my small part today: I planned my morning so that I had those extra ten minutes to walk to the gym instead of driving. Not only did I get fresh air there and back, but because I was on foot, had a chance to have a 1.5 minute conversation with a friend I rarely see while she was stuck at the red light. (This pleasant impromptu meeting does confirm my fear that it is best not to walk when feeling antisocial. There is no sensible route that doesn’t involve crossing one of the main roads in town, while standing out in the open for several minutes. Yes, I can be a real hermit at times.)

It helps not to be a perfectionist if you are going to have DIY leaf removal with the assistance of two guys in their teens. 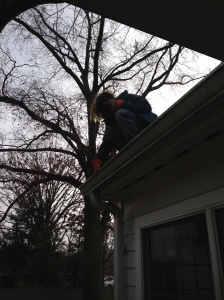 Thanks to one of our volunteers, another few piles of leaves were raked up and stuffed into compostable bags. At some point they will be removed by the town crews. What a big fuss over leaves on lawns! Since I have my noise issues–which I now know is a condition called misophonia that I share with many others–I do need to check the calendar and be sure to be elsewhere when the leaf collection vehicles come scraping and beeping by sometime soon again. It was, I promise, more than my imagination: they really were here off and on from 7am to almost 4pm last time. Had I only known, I would have planned to be elsewhere. 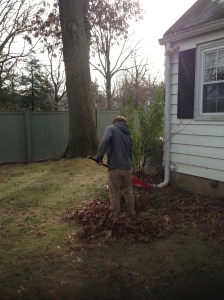 And now that the leaves are gutter free, two guys at work have begun, and almost completed, another seasonal ritual: putting up the Christmas lights. When we moved here from North County, San Diego, and kept up the tradition of festooning the house–not just the tree–with lights, I was sure that this would be looked upon as terribly déclassé. Much to my surprise, neighborhood friends and acquaintances often remark upon how much they enjoy our Christmas lights. And those who find them cheap and tacky are probably kind enough to keep such thoughts to themselves 🙂 These days a peace symbol joins the lights. Though Dr. Bronner–whose philosophy I must research one day–doesn’t live here, and we don’t proselytize “All One God Faith,” the peace symbol includes one and all. Didn’t someone called Tiny Tim once say something similar at the end of a book by Charles Dickens? Am I already getting into the holiday mood?